Julian Assange will not be extradited to US, UK court rules - follow live

The 49-year-old cannot be extradited due to his mental health and suicide risk, District Judge Vanessa Baraitser ruled

Starting the new year off right.

Other recent news, although I’m late in hearing about it:

LETTER OF INTENT TO RESIGN

I am writing to advise you that I have decided that I will be resigning from First Look Media (FLM) and The Intercept.

The precipitating (but by no means only) cause is that The Intercept is attempting to censor my articles in violation of both my contract and fundamental principles of editorial freedom. The latest and perhaps most egregious example is an opinion column I wrote this week which, five days before the presidential election, is critical of Joe Biden, the candidate who happens to be vigorously supported by all of the Intercept editors in New York who are imposing the censorship and refusing to publish the article unless I agree to remove all of the sections critical of the candidate they want to win. All of that violates the right in my contract with FLM to publish articles without editorial interference except in very narrow circumstances that plainly do not apply here.

Worse, The Intercept editors in New York, not content to censor publication of my article at the Intercept, are also demanding that I not exercise my separate contractual right with FLM regarding articles I have written but which FLM does not want to publish itself. Under my contract, I have the right to publish any articles FLM rejects with another publication. But Intercept editors in New York are demanding I not only accept their censorship of my article at The Intercept, but also refrain from publishing it with any other journalistic outlet, and are using thinly disguised lawyer-crafted threats to coerce me not to do so (proclaiming it would be “detrimental” to The Intercept if I published it elsewhere).

I have been extremely disenchanted and saddened by the editorial direction of The Intercept under its New York leadership for quite some time. The publication we founded without those editors back in 2014 now bears absolutely no resemblance to what we set out to build – not in content, structure, editorial mission or purpose. I have grown embarrassed to have my name used as a fund-raising tool to support what it is doing and for editors to use me as a shield to hide behind to avoid taking responsibility for their mistakes (including, but not only, with the Reality Winner debacle, for which I was publicly blamed despite having no role in it, while the editors who actually were responsible for those mistakes stood by silently, allowing me to be blamed for their errors and then covering-up any public accounting of what happened, knowing that such transparency would expose their own culpability).

But all this time, as things worsened, I reasoned that as long as The Intercept remained a place where my own right of journalistic independence was not being infringed, I could live with all of its other flaws. But now, not even that minimal but foundational right is being honored for my own journalism, suppressed by an increasingly authoritarian, fear-driven, repressive editorial team in New York bent on imposing their own ideological and partisan preferences on all writers while ensuring that nothing is published at The Intercept that contradicts their own narrow, homogenous ideological and partisan views: exactly what The Intercept, more than any other goal, was created to prevent.

I have asked my lawyer to get in touch with FLM to discuss how best to terminate my contract. Thank you -

Is this part of your SEO plan? How about another go at the barrington declaration. Not enough links here yet. 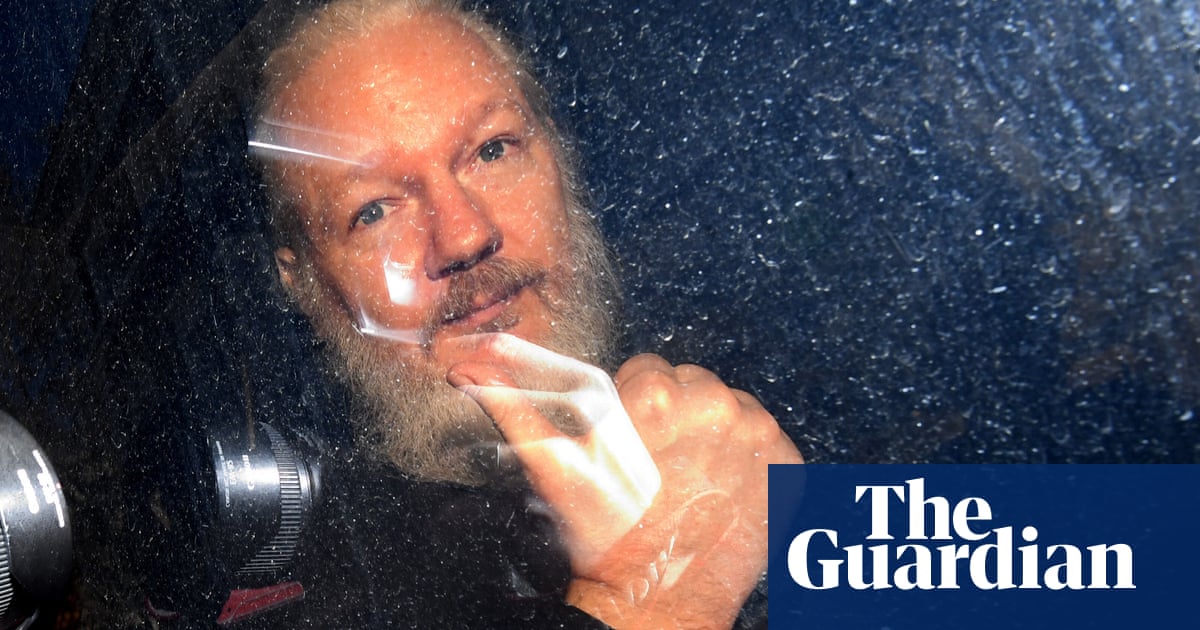 Julian Assange cannot be extradited to US, British judge rules

Judge says it would be ‘oppressive’ to extradite WikiLeaks founder to US, citing concerns for his mental health

Julian Assange cannot be extradited to the US to face charges of espionage and of hacking government computers, a British judge has decided.

Lawyer for US authorities are to appeal against the ruling, which was delivered at the central criminal court by the district judge, Vanessa Baraitser.

Delivering her ruling the judge said said the WikiLeaks founder was likely to be held in conditions of isolation in a so-called supermax prison in the US and procedures described by US authorities would not prevent him from potentially finding a way to take his own life.

“I find that the mental condition of Mr Assange is such that it would be oppressive to extradite him to the United States of America,” she said.

Assange has been taken back to Belmarsh prison ahead of an application on Wednesday for his release on bail, which will refer to conditions at the high-security prison in south London against the backdrop of the worsening Covid-19 pandemic.

The judge’s decision, focusing on Assange’s health, came after she knocked down one argument after another made last year by Assange’s lawyers. Sending him to the US would not breach a bar on extradition for “political offences” she said, and she had no reason to doubt that “the usual constitutional and procedural protections” would be applied to a trial he might face in the US.

But she accepted the evidence of prominent medical experts, including details of how Assange had suffered from depression while in prison in London. “The overall impression is of a depressed and sometimes despairing man who is genuinely depressed about his future,” said Baraitser.

The case against the 49-year-old relates to WikiLeaks’s publication of hundreds of thousands of leaked documents about the Afghanistan and Iraq wars, as well as diplomatic cables, in 2010 and 2011.

Prosecutors say Assange helped the US defence analyst Chelsea Manning breach the US Espionage Act, was complicit in hacking by others and published classified information that endangered informants.

Assange denies plotting with Manning to crack an encrypted password on US computers and says there is no evidence anyone’s safety was compromised. His lawyers argue the prosecution is politically motivated and that he is being pursued because WikiLeaks published US government documents that revealed evidence of war crimes and human rights abuses.

At the weekend, Assange’s partner had said a decision to extradite the WikiLeaks co-founder to the US would be “politically and legally disastrous for the UK”.

Stella Moris, who has two children with Assange, said a decision to allow extradition would be an “unthinkable travesty”, adding in an article published by the Mail on Sunday that it would rewrite the rules of what it was permissible to publish in Britain.

“Overnight, it would chill free and open debate about abuses by our own government and by many foreign ones, too.”

Over the course of hearings last year, lawyers for Assange had called witnesses who told the court that WikiLeaks had played a vital role in bring revelations to light that exposed the way in which the US had conducted wars in Iraq and Afghanistan.

Among them, the founder of the legal charity Reprieve, Clive Stafford-Smith, said “grave violations of law” such as the use of US drones for targeted strikes in Pakistan had been brought to light with the help of documents published by WikiLeaks.

Daniel Ellsberg, who leaked the Pentagon Papers about the Vietnam war, had also defended Assange, saying he had acted in the public interest, and warned he would not get a fair trial in the US.

Assange has been in custody in Britain since April 2019, when he was removed from the Ecuadorian embassy in London, where he had taken refuge seven years previously to avoid extradition to Sweden over a sexual assault case that was subsequently dropped.

Starting the new year off right.

Any thoughts on some of the claims presented here about the judge who made that ruling?

Nope. Seems reasonable to me. And it’s not about opinion - Assange’s mental health is likely to be pretty fucked up by now. Well done Sweden.

I still say he should have gone and had his day in court in Sweden, where his story, and the story of his accusers could have been heard and tested.

Of course you say that, propping up your fake narrative of what you and Judders either falsely implied or outright lied about what Assange was allegedly accused of.

Obviously the Sweden ‘case’ would have been no drama for Assange if the threat of extradition to the US wasn’t attached to it.

And why won’t you mention that the Sweden prosecutor was blocked from meeting with Assange prior to both the dropping of the case and his subsequent Belmarsh internment. It’s because you outright lie, and you also lie by omission. The case would not have been dropped by Sweden if they’d thought it a righteous case.

Soon after the barring of that meeting Sweden wiped their hands of the whole stinking shitshow.

I can’t quite recall whether it was dumpile or Judders or both claiming they were against the extradition of Assange to the US, despite all their fake news character assassination copy/pasta bs against Assange.

Which is obviously yet more disingenuous bullshit

Sweden tried to dispel the matter by bringing the Sweden prosecutor to meet with Assange. But of course THAT motion was denied by the swomp bc the swomp wasn’t interested in resolving it, i.e not interested in justice, and to attempt to create some kind of fake ‘stigma’ about Assange that may yet be flogged by bs peddlers to the herd, as dumpile is doing now.

Only the extremely naive or insane don’t know where the scandal really is ffs.

And the swomp figures it should continue to whip Assange for a while yet, to make sure any respectable journalists left out there will think twice about truthsaying.

And why won’t you mention that the Sweden prosecutor was blocked from meeting with Assange prior to both the dropping of the case and his subsequent Belmarsh internment. It’s because you outright lie, and you also lie by omission. The case would not have been dropped by Sweden if they’d thought it a righteous case.

I wouldn’t get special treatment outside of normal procedure if I tried to hide from extradition in an embassy. He could have worked through the legal process like the rest of us have to.

The case would not have been dropped by Sweden if they’d thought it a righteous case.

The entire persecution of Assange is outside of “normal procedure” innit.

Assange didn’t refuse to meet the prosecutor from Sweden, your precious swompmasters denied that which under such extraordinary circumstances was in fact the normal procedure.