Barring a run away black hole being created at CERN, this little baby is coming to papa.
The guys at the music store know me by name because I’m pestering them for news of it’s arrival. they shrug and say “freight goes as fast as freight does”. I nod thinking how mystical that sounded 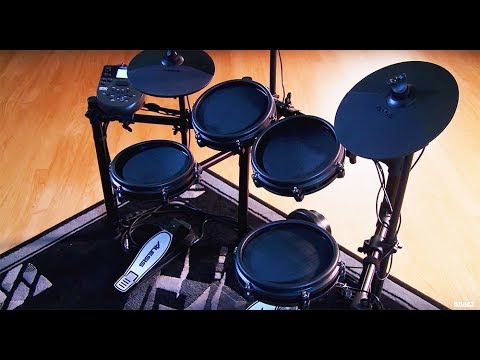 Sweet, I had an old Alesis model years ago. They were lots of fun, but this new model looks really pro compared that that one. Have a blast when you get them!

I still own an Alesis SR16. Bastard won’t die! As a drummer, that’s the only drum machine I’ve ever owned, and the lousy fucker refuses to die.

Also, I actually still have a Roland TD-7 electronic kit. The original V-Drums if you look at the synthesis techniques, before they were called Roland VDrums.

As for the kit in the video, sounds decent, but not nearly as decent as using that kit to trigger BFD3 or 4, or one of the other ones, or whatever version number they’re up to.

I’d definitely have one of them for rehearsals and jamming and stuff.

Yeah I tried a Roland and it was also great I think. I never played the drums before so this is big step.

I have bfd3 so I have the sounds.
I guess I just have to start programming the muscle memory and have at it. Maybe the odd paradiddle.